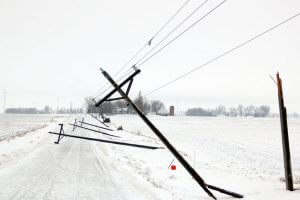 The record-setting snowstorm that walloped Oregon last February was so severe it turned off the lights to all of Douglas Electric Cooperative’s members for the first time in the co-op’s 80-year history.“We’d never had a 100% outage before,” said Keith Brooks, general manager of the Roseburg-based co-op. “It took about three and a half weeks to get everyone’s power back on.”

Full recovery for the co-op has taken much longer.

Douglas Electric is struggling to pay for $10 million in storm damage, including the loss of nearly 400 power poles and 105 miles of wire, Brooks said. The co-op had to hire about 150 contract workers to help its 35 employees restore power to consumer-members.

“It was transformative for the co-op,” Brooks said. “We’ve never really dealt with anything of this scale before.”

To make matters worse, the federal disaster grants that were supposed to help the co-op recover have put Douglas Electric in danger of losing its tax-exempt status.

The co-op has applied for about $7 million in grants from the Federal Emergency Management Agency—aid that, because of a change in the 2017 federal tax law, will put it well over the 15% limit on non-member income to keep its tax-exempt status.

Language in the 2017 law threatens the tax-exempt status of more than 900 co-ops nationwide by inadvertently redefining grants as non-member income. Previously, these grants had been counted as capital.

Brooks and other co-op CEOs are lobbying Congress to pass the RURAL Act, a bipartisan bill that would allow co-ops to accept grants again without risking their status. He and other co-op leaders are telling their stories to lawmakers to urge members of Congress to sign onto the bill, which had more than 200 co-sponsors in the House and nearly 30 in the Senate as of Oct. 1.

What follow are other examples that underscore the negative impact of the tax law:

It isn’t only natural disasters that are triggering the dilemma for co-ops. In upstate New York, Otsego Electric Cooperative finds itself at risk of losing its tax-exempt status because it accepted $14 million in state grants to bring high-speed internet service to its members.

“Unless Congress fixes the problem, we will have to file a for-profit tax return for this year and pay tax of as much as $1 million,” said Tim Johnson, CEO of the small Hartwick-based co-op, which has annual revenues of about $7 million.

The co-op began investing in retail broadband before the tax law change and has continued because it believes the service is essential for its members, many of whom live in high-poverty areas.

“Without broadband, kids were having trouble doing their homework at night,” Johnson said. “Just to be able to communicate and participate in today’s economy, you need high-speed internet. … Everyone has it now except rural people.”

Damaged Transmission Cable in WisconsinIn June 2018, the 20,000-foot-long underwater cable that brings electricity to members of the Washington Island Electric Cooperative in Wisconsin failed, cutting off power to the island’s residents.

The tiny co-op used diesel generators to restore power to its 860 members within 20 minutes, but the cable—damaged by years of ice chunks pushing against it each spring—needed to be replaced. Repairs to the existing cable and installing a new one cost more than $4 million, said Robert Cornell, the co-op’s general manager.

The co-op was eligible for $600,000 in state disaster aid and the state legislature is budgeting $2 million to help pay for the new cable, he said.

“Based on the way things are now, we absolutely will lose our tax-exempt status,” Cornell said. “We’re going to be paying taxes on the money the state gave us to help us. I’m not an accountant, I’m an engineer. But, to me, that makes no sense.”

To help it recover, the co-op accepted $32 million in FEMA grants and now faces the loss of its tax-exempt status, said CEO John Bartley. The co-op has had to institute a storm recovery charge of about $9 a month for its members to help pay for repairs that the FEMA aid doesn’t cover. If Gulf Coast EC has to pay taxes on top of that, co-op members will be hit even harder, Bartley said.

“Our members are still struggling to fix their homes and businesses as it is,” he said. “Asking them to pay millions more in higher rates is just wrong.”

An ice storm in early April knocked down or damaged almost 1,300 power poles owned by Federated Rural Electric Association in Minnesota, cutting off electricity to about 80% of members. The co-op, with a workforce of 80, spent nearly $900,000 to restore power within about three days. Rebuilding its system after the storm will cost at least $3 million more, said Scott Reimer, general manager of the Jackson-based co-op.

Reimer said FEMA is about to do a final review to determine how much of the damaged system will meet eligibility standards for federal assistance. The co-op will use these funds to help pay for the $4 million in damages, he said. The co-op asked for the FEMA grants because “if we don’t, then this all goes on the back of our membership,” Reimer said.

The co-op should be able to get through the disaster without being forced to lose its tax-exempt status, he said.

“But all it would take is another storm to push us over the limit,” Reimer said. “Once our members of Congress hear about the problem, it’s an easy sell to get them to support the RURAL Act. That’s what grassroots do for you. Once we tell them what’s going on here, it’s easy for them to jump on the bandwagon to fix it.”