Electric cooperatives have a broad financial impact on the United States, directly or indirectly supporting nearly 612,000 jobs each year and contributing hundreds of billions of dollars to the economy over a five-year period, according to a new analysis. 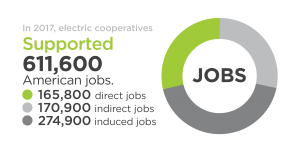 Between 2013 and 2017, co-ops employed an average of 67,800 people a year, hired about 100,600 contractors, and by extension helped provide jobs for about 170,300 people who supplied equipment and services, the report states. Another 273,100 jobs were supported through consumer spending by co-op employees, contractors and suppliers.

“Affordable and reliable electricity is a key ingredient for a successful economy. Because electric cooperatives were built by, belong to, and are rooted in the communities that they serve, they play a vibrant role as economic cornerstones for millions of American families, businesses and workers.”

The study, “The Economic Impact of America’s Electric Cooperatives,” was commissioned by NRECA and the National Cooperative Services Corporation, an affiliate of the National Rural Utilities Cooperative Finance Corporation (CFC) and conducted by FTI Consulting Inc. It used data from generation and transmission cooperatives as well as distribution co-ops.

In addition, people employed directly and indirectly by co-ops paid more than $52 billion in federal taxes and nearly $60 billion in state and local taxes over the five-year period, the analysis estimates.

Electric co-op spending during the study period totaled nearly $360 billion. Most—nearly $274 billion—went toward operations, including employee salaries and fuel for power plants. Some $60 billion was spent on capital investments, and more than $20 billion on maintenance.

“For decades, America’s electric cooperatives have played a vital role in the U.S. economy, the report notes. “Electric co-ops…are locally-engaged in their communities, driving economic activity and fostering development.”

Co-ops that brought electricity to rural areas for the first time in the 1930s are now bringing solar energy and broadband to their consumer-members, CEO Mike Keyser of BARC Electric Cooperative in Virginia said at a Capitol Hill briefing Wednesday to unveil the report.

“With everything we have going on today impacting the community, BARC is as relevant to our customer-owners’ quality of life as it was 80 years ago when we lit the first light bulb,” Keyser said. “We employ 70 full-time employees between our electric cooperative and broadband subsidiary–and we can say something that seemed unimaginable five years ago–we’re growing.”

“The economic impact Tipmont and our rural cooperatives have on rural America is unquestionable,” Holcomb said. “Our tools may expand to include broadband and perhaps other essential services. But our mission of community success never changes.”