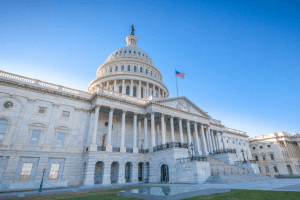 When Congress returns next month from its August recess, there are only about 40 legislative days left this year in the House and about 50 in the Senate. That leaves a small window of opportunity for progress on the most pressing issues for electric cooperatives.

John Cassady, NRECA’s vice president of legislative affairs, gives an update on how co-op priorities have fared so far in 2019 and what’s next. The greatest urgency in this session of Congress is to try to push through two key bills: the SECURE Act, which would save co-ops more than $30 million a year in pension insurance premiums paid to the federal government, and the RURAL Act, which would protect co-ops from losing their tax-exempt status if they accept government funds, such as disaster relief or rural broadband grants. When Congress returns next month from its August recess, there are only about 40 legislative days left this year in the House and about 50 in the Senate. That leaves a small window of opportunity for progress on the most pressing issues for electric cooperatives.

What would you say is the most important progress that NRECA lobbyists have made so far in this session of Congress?

“We’ve made progress on key priorities, including progress on our top two legislative initiatives. The first is ensuring that the Senate follows the work of the House and finishes the job on the SECURE Act, which contains the language that provides relief from the high premiums the Pension Benefit Guaranty Corp. is charging our co-op pension plan. Our premium relief is tied up in a broader retirement package that has been approved by the House on an overwhelmingly bipartisan vote.

“Currently, the larger package is being held up by a few senators, not based on anything related to the substance of the issue that we care about. Nevertheless, it’s slowed the momentum from quick Senate action. Now, there is going to be a process on the Senate floor for the SECURE Act to move forward, and the hope is that the process will eventually lead to the Senate passing the bill and then getting it to the president’s desk this fall.

“There are a lot of trapdoors throughout the process, and that’s why these things never come easy … but this issue has been a long time coming.”

What about the other top legislative priority, the RURAL Act?

“On the issue of the RURAL Act, we’ve made a great deal of progress but are not quite as far along as the SECURE Act. This time last year, we were still doing a lot of the behind-the-scenes work on this issue: explaining to key members of Congress and their staff the impact of the issue, why it needed to be addressed, and lining up champions for our legislation. A lot of the blocking and tackling work had to be done.

“But we also face some obstacles. There are still some negative optics among some on the Hill who associate anything tax-related with the Tax Cuts and Jobs Act of 2017, which was handled in a very partisan manner that created a lot of bad partisan feelings. There are still some rough edges out there on Capitol Hill when tax policy is brought up. The challenge we have had, and what we’ve tried to maneuver around, is to avoid having the perception on the Hill that our issue is a purely partisan priority. We want to create a bipartisan recognition that our issue needs to be addressed on behalf of co-ops throughout the country and the rural communities they serve.”

Co-ops are worried about losing their tax-exempt status if they take federal, state or local broadband grants or disaster relief grants from the Federal Emergency Management Agency. Is this one of the issues you hear most about from co-ops?

“Yes, we’re hearing concerns in certain sections of the co-op world. I know Florida co-ops are very engaged from a FEMA standpoint, as an example. Many co-ops are leading with the concern that if their co-ops are hit with a major storm and there’s a presidential disaster declaration and FEMA grants are dispersed, that having those resources that help us restore power would then negatively impact our tax-exempt status and generate a tax liability for our member co-ops. That is an issue that helps put a point on our advocacy.

“The other issue is that some co-ops are working to help bridge the digital divide and leaning on grant dollars to put forward the initial capital investment. For example, there are a number of co-ops in Indiana looking to take advantage of the broadband grant program that the state has instituted. In doing so, they could potentially upset their tax-exempt status, which really runs counter to the goal of bringing broadband to rural areas. It’s a perverse outcome of public policy that our members would be in this position. They’re just trying to do the right thing, to bring solutions to their communities for broadband, and this unintended consequence has real impact on their ability to do so.”

Do you think there will be a big infrastructure bill in this Congress that could include more broadband funds and grid modernization?

“If you were to go through the halls of Congress, every member would say ‘infrastructure is a great idea. Democrats and Republicans should come together on infrastructure.’ But if you don’t have the right environment, it makes it challenging. There’s a high degree of tension between congressional Democrats and the Trump administration … and it doesn’t show any signs of letting up. So that doesn’t create a conducive atmosphere for bipartisan cooperation.

“If I had to handicap the likelihood of a broad infrastructure package making its way through Congress, I would say it’s a low-probability proposition at this point.”

Have you played more offense or more defense on co-op issues so far with this Congress?

“We’re playing offense on the SECURE Act and the RURAL ACT. We played defense on a number of issues as well. A good example is the administration’s budget proposal to, once again, propose that the transmission assets of the Power Marketing Administrations be privatized. We had to play defense there and engage with policymakers on the Hill to ensure that that idea didn’t gain any footing.”

Erin Kelly is a staff writer at NRECA.