It took some time, but grandma and grandpa are getting with the digital revolution in a big way. 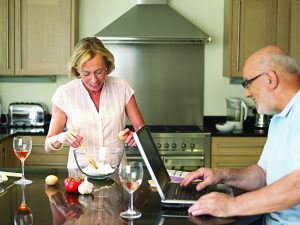 “The once-wide technology divide between the old and the young continues to shrink as the middle-age and senior members expand their utilization of technology,” said Audrey Gould, research analyst at TSE Services, which produced the Touchstone Energy® Cooperatives 2017-2018 National Survey on the Cooperative Difference. More than 19,000 members of 85 co-ops in 21 states were interviewed.

“Our oldest members continue to make gains in acquiring wireless devices such as smartphones and tablets,” said Gould, noting that the gap is not only narrowing, it’s closing fast.

Gould also noted that more than two-thirds of members over the age of 65 now have internet at home.

Indeed, co-op members of all ages are keeping up with new technology. The survey found that nearly three-quarters of all co-op member households use a wireless router, 70 percent have a laptop, and 63 percent own a tablet. They’re also ditching the old stuff.

“As mobile computing grows, market presence of legacy technologies such as landline phones and desktop PCs has declined,” said Gould.

She noted that it’s largely older members with landlines, which still turn up in about 70 percent of homes of members 75 or older, while fewer than 20 percent of members ages 18 to 34 have one.

Still, there’s no disputing that from the youngest members to the oldest, digital technology adoption is now a mainstay.

“Age is becoming less of a factor when reaching members with technology,” said Gould.

“Our members are more connected than ever before.