Geoff and Tina Wilson planned to live off the grid in a remote part of Utah when things went horribly awry. Smoke from wildfires and steady rains hampered their lone solar panel, and their generator broke. Health problems prevented Geoff, a Navy veteran, from working, and Tina worked only part-time as a teacher’s aide. Their savings were all used up to pay for Geoff’s medical expenses. 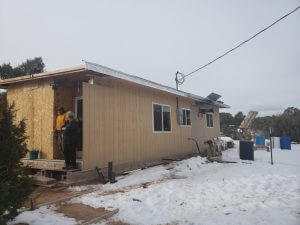 The Wilsons were coping with those hardships for nearly two years until employees at Moon Lake Electric Association Inc. in Roosevelt, Utah, adopted the couple during the holidays, an act that brought power—and so much more—to their house.

“Words cannot adequately express how blessed we feel because of the outpouring of support we have received from the community,” the couple wrote in a thank-you note they dropped off at the co-op’s headquarters. “We thank you from the bottom of our hearts for being a part of that.”

Shortly after the Wilsons, both in their mid-fifties, got married in March 2016, they settled in Geoff’s house in Talmage, an unincorporated stretch of Utah, where they could enjoy peace, quiet and unspoiled views. The 600-square-foot house was wired for electricity, but they couldn’t afford the line extension. So they decided to go without.

“We got a generator and a 100-watt solar panel that was enough to charge our phone and illuminate a lamp. In order to keep our food fresh, we had to use ice chests,” said Tina. “We later were able to purchase a refrigerator that had to be converted to propane.”

Tragedy struck in late May 2017 when Geoff, a sonar technician on a U.S. Navy submarine, was infected with hantavirus, a severe, sometimes fatal, respiratory disease spread through rodent droppings. Complications resulted in a six-month hospital stay and the amputation of both legs. To be closer to Tina’s job, they relocated that summer to a temporary home in Altamont.

What savings they had were wiped out.

“The generator kind of quit on us,” said Tina. “And we didn’t have a lot of solar because of smoke from the California wildfires and monsoon season. We spent a lot of time in the dark, and at night it was in the single digits. We had just enough solar for our phone and a wood-burning stove. We had a wooden tank that stored 260 gallons of water, which we got from a neighbor’s well. We’d spend all day filling the tank. It was a difficult one and a half years.”

Geoff and Tina Wilson’s home in Talmage, Utah, now boasts a meter and a feeder line. Previously, a 100-watt solar panel was the biggest source of power. (Photo By: Curtis Miles)

In all that time, the Wilsons never called Moon Lake Electric Association for help, or anyone else for that matter. That’s not surprising, said Yankton Johnson, the co-op’s manager of personnel and member relations.

“We kind of assume that some of our members are out here because, first off, they don’t have a ton of money. And secondly, they just want to live a secluded life. We’re about three hours from Salt Lake City, and a lot of people move into our area simply because they want to be left alone. We just don’t get to know a lot of these folks,” said Johnson.

The barrier of anonymity fell just before the holidays last year. Each season, co-op employees survey members and pool resources to help a family struck by hardship.

Curtis Miles, the co-op’s line superintendent, nominated the Wilsons. Sabrina, Miles’ wife and a coworker of Tina’s at the school district, knew the couple’s circumstances.

“One day, she said, ‘If I can get you hooked up with electricity, what would you say?’” Tina Wilson recalled. “I said, ‘Yes, absolutely!’”

Employees and directors gladly chipped in about $3,900, and crews offered to extend the line from the road to the Wilsons’ house for free. But the co-op soon learned that a solution to the Wilsons’ troubles was far more complex: The Talmage house failed a mandatory inspection because of lack of running water and an inadequate septic system.

The co-op’s connections in the community led to in-kind and cash contributions of about $20,000 to $25,000, including labor and parts.

“We’re a rural community and we all know each other. We’ve worked together on different things and different projects, so it’s not like I was talking to total strangers asking for help,” said Johnson. “They knew it was a great project and that a cooperative was behind it, wanting to make it work.”

Contributions from local companies included a septic tank and pipe from Mountain Land Supply, a septic system design from an excavator, and a new fuse box and new wiring from an electrician.

When the county objected to the lack of running water—stalling the project a second time—and assessed nearly $1,000 in fees and penalties for building violations incurred by the Wilsons, the co-op paid commissioners a visit.

“I asked if they would waive those fees, and they did,” said Johnson. “There was such an outpouring of support from the employees, board of directors and members. It’s humbling to see everyone come together to complete a project of this magnitude.”

Snow and ice have delayed installation of the septic tank and water well, but that will happen in the spring, said Johnson.

NRECA spoke with the couple a day after the lights came on, and the Wilsons, while delighted, were humbled by the outpouring of support from people they’ve never met.

“It will be the first time we’ve used a hairdryer in three years, and now we can use my bread machine and crockpot,” said Tina. “The co-op stuck with us the whole time and when there were delays, they said, ‘Don’t worry. We’ll take care of it.’ Our heads are spinning that people would go to such great lengths to help us. It’s unreal.”

Victoria A. Rocha is a staff writer at NRECA.