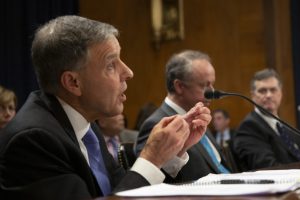 Sukut spoke in support of bipartisan legislation by Sens. John Barrasso, R-Wyo., and Sheldon Whitehouse, D-R.I., that would spur new strategies to remove CO2 from the air and store it permanently underground or transform it into marketable commodities.

The bill, known as the USE IT Act, would direct the Environmental Protection Agency to support research on carbon capture, utilization and sequestration; improve the permitting process for projects; and establish guidance for developers and operators of CO2 pipelines.

“There is no shortage of challenges as we seek solutions that balance the need for affordable and reliable energy with the challenge of reducing CO2 emissions,” Sukut said in his testimony before the Senate Environment and Public Works Committee, which Barrasso chairs. “However, the cooperative model was established specifically in response to a challenge—to extend electric service at the time to those areas no one else would—and continues to serve us well as the electric industry evolves.”

Basin Electric, which is based in Bismarck, North Dakota, is a partner with NRECA and Tri-State Generation and Transmission Association in the Integrated Test Center at Dry Fork Station in Wyoming. The test center, which is overseen by the state, provides a place for researchers to “explore new and innovative solutions” to reduce CO2 emissions, Sukut said.

Basin Electric, through the Dakota Gasification Company, has already shipped more than 35 million tons of CO2 via pipeline to Canada for enhanced oil recovery since 2000, Sukut said.

Sukut said his co-op also has partnered with the Plains CO2 Reduction Partnership in the Department of Energy’s CarbonSAFE program to explore geology in North Dakota and Wyoming with the goal of developing a large-scale injection test well to store CO2.

“Our region is particularly blessed with the geology for CO2 sequestration and enhanced oil recovery, but either of those options will require additional buildout of pipeline infrastructure to come to fruition,” said Sukut, who was one of three witnesses at the hearing. “For this reason, we support the Utilizing Significant Emissions with Innovative Technologies (USE IT) Act and its provisions to expedite guidance, permitting and construction of CO2 infrastructure.”

By next year, 25 percent of the energy that Basin Electric delivers to its members will be from renewable sources, Sukut said. He added that wind and other renewables have significantly lowered the co-op’s CO2 emissions per megawatt hour and he expects that trend to continue.

“Our number one priority as a utility, besides providing low-cost and reliable power, is to ensure that our generating facilities do not become stranded assets…which our members still have to pay for yet receive no benefit from,” he told the committee.

Sukut said Basin Electric has “a good story to tell with respect to CO2 reduction” because of the changes it has undergone in recent years.

“We are well-positioned to serve our members at the end of the line now and well into the future,” he said.