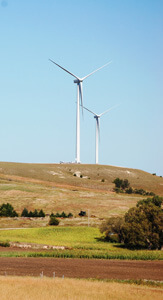 Sunflower’s involvement with wind power can be traced back to the early 1990s when they participated in the Kansas Electric Utility Research Program (KEURP). Sunflower, along with other Kansas utilities, researched the wind power potential for Kansas by mapping most of the state’s wind energy sites.

The Smoky Hills Wind Farm is a wind-powered electric generation facility located approximately 20 miles west of Salina, Kansas, north of Interstate 70 and west of Highway 14. Phase I of the facility entered service in January of 2008 with a nameplate capacity rating of 100.8 MW. Through a Power Purchase Agreement (PPA), Sunflower has a 50 percent undivided interest in the electric output of Phase I. In addition to Sunflower, Midwest Energy, Inc., and the Kansas City Board of Public Utilities purchase power from the project.

TradeWind Energy developed this project for Enel Energy, the largest utility in Italy. Phase 1 took approximately 60 acres of land out of service to build roads, turbine foundations, and maintenance buildings. The rest of the approximately 10,000 acres leased for the Phase 1 is farmed and ranched exactly as it was before the project was constructed.

Phase 1 is comprised of 56 1.8 megawatt Vestas turbines that sit atop 80 meter (262 ft.) towers and feature blades of approximately 130 ft, longer than the wing of a Boeing 747 jetliner. Phase II is comprised of 99 1.8 megawatt Vestas turbines, and have the same specifications as Phase I. Both phases, which total 20,000 acres, take only about two percent of land out of service. 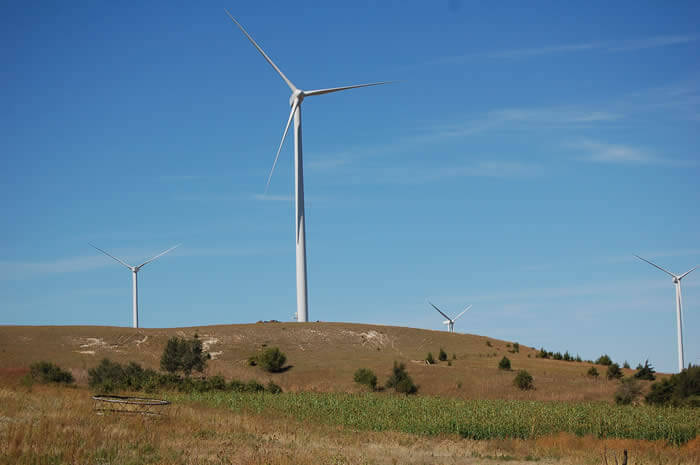